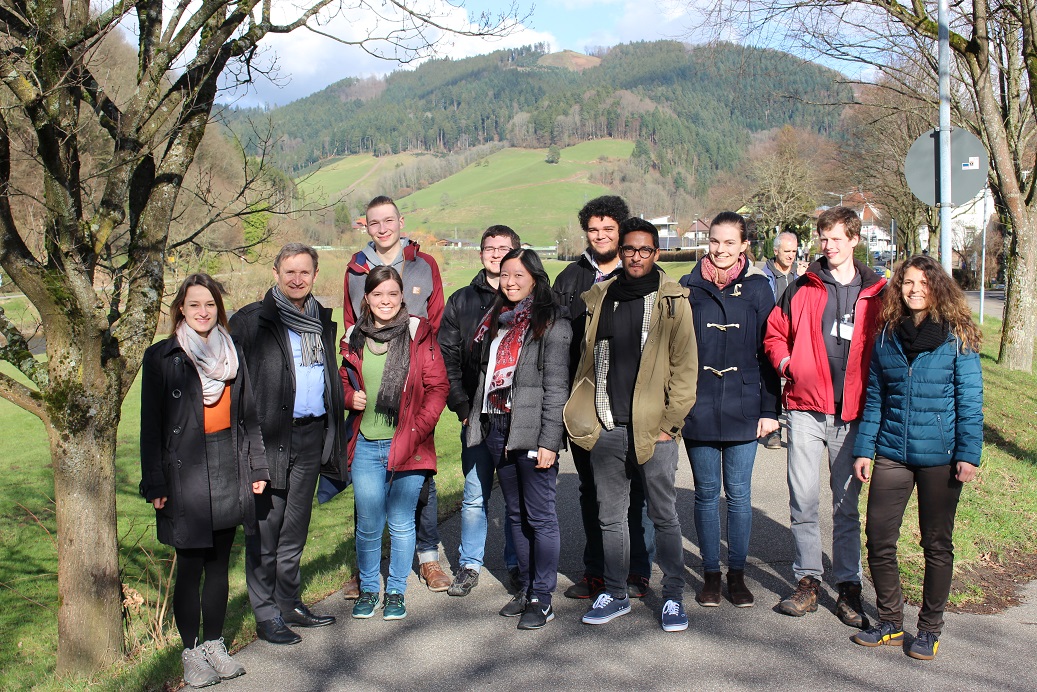 Committed students visited the health workshop "Gesundheit 4.0 - Vernetzte Zukunft im Team" ("Health 4.0 - networked future as a team") in Kinzigtal. Photo: OptiMedisHospitations in rural medical practices, insights into the integrated care of Gesundes Kinzigtal, and various workshops addressing the exciting question of "what does the future of the medical profession look like?": In March, eight medical students, and one pharmacy student from all across Germany, who are all interested in healthcare policy, came to Kinzigtal for a future workshop. To this event, Dr h. c. Helmut Hildebrandt, Managing Director of Gesundes Kinzigtal GmbH, had invited the representatives of the AG Gesundheitspolitik der Bundesvertretung der Medizinstudierenden in Deutschland e.V. ("Healthcare Policy of the Federal Representation of Medical Students in Germany", or "BVMD" for short in German). Together with the Gesundheitsakademie Kinzigtal ("Kinzigtal healthcare academy"), the students designed a varied programme on the topic of "Health 4.0 - networked future as a team".

Future as a team

To start with, the prospective and practising doctors got to know each other during the plenary session of the Medizinischen Qualitätsnetzes Ärzteinitiative Kinzigtal e.V. ("Kinzigtal Medical Quality Network Medical Initiative", or "MQNK" for short in German). The next morning, the students were then able to observe the network of physicians in their practices. This up-and-coming generation of doctors found the palpable sense of community among the doctors in Kinzigtal, as well as their good networking with the agents involved in healthcare, to be a particular benefit. They all agreed: going it alone belongs in the past. The goal must be to work in a well networked group that stands together to endorse quality improvements and innovative methods in healthcare - and to achieve this across professions.

But even with good networking, the medical profession itself must remain attractive: In rural areas and deprived urban areas in particular, filling job vacancies at doctor's offices is a problem - especially when it comes to specialist positions. "New, more flexible conditions are needed, because the younger generation of doctors do not necessarily want to commit themselves to their own practices for the next few decades," emphasises Helmut Hildebrandt.

In a World Café, the participants discussed the conditions under which young doctors would settle in a rural area such as Kinzigtal. It became clear that, under the existing remuneration system in the outpatient sector, the new doctors lack the incentives to settle. The students also pointed out that it is problematic how little one is confronted with the necessary knowledge regarding, for example, the areas of business administration and personnel management in the current training programme. One idea: More sponsorships between practising doctors and interested students. In addition, the participants created visions of more flexible solutions, such as a settling for a fixed period, or dual concepts from practice and research for practising doctors.

The medical profession will change considerably

In the context of digitisation in particular, many tasks and processes involved in the daily life of doctors are changing dramatically - there was agreement on this in the discussion on "Medicine 4.0". Positive emphasis was placed on the ever-improving networking possibilities between allied health professions. The conclusion arrived at, was that gaps in care can also be counteracted, at least temporarily, thanks to intelligent telemedicine concepts or mobile practices and specially trained health coaches. "I am impressed by the students' visions and ideas. They look far beyond their own horizons, know a lot about the healthcare system, and want to participate in new, cooperative healthcare concepts," enthuses Helmut Hildebrandt.

There was a reunion at the Future Tones Conference in Hamburg at the end of June - as speakers, three of the medical students gave exciting impulses and insights into their "future". You can read more about that conference here.